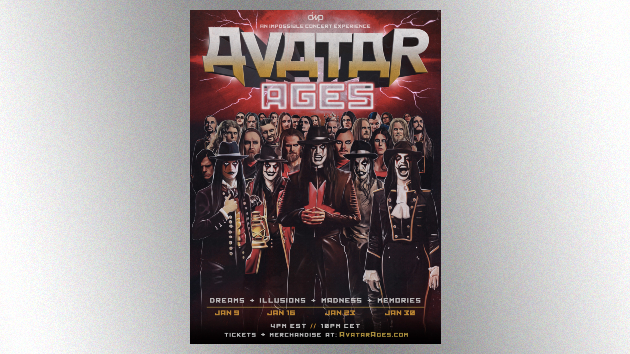 The first concert, airing January 9, will include a performance of Avatar’s new album Hunter Gatherer in full, as well as the Swedish metal group’s “biggest songs.”

Subsequent performances will consist of fan-voted set lists themed around certain albums. The January 16 show will feature selections from 2018’s Avatar Country and 2016’s Feathers & Flesh, followed by songs from 2014’s Hail to the Apocalypse and 2012’s Black Waltz on January 23.  Finally, tracks from 2009’s Avatar, 2007’s Schlacht and 2006’s Thoughts of No Tomorrow will be featured on January 30.

“Nothing can top the feeling of standing eye to eye with the roaring beast that is a metal crowd, hungry for blood,” says frontman Johannes Eckerström. “Instead, what we are setting out to do is a series of shows we could never do on a normal stage.”

“You will see Avatar as you’ve never seen us before,” he adds. “More music, more madness. We enter this with a game plan like no other, but ultimately the power is yours. This is something we’ll create together. We have missed you.”

For ticket info and to vote on set selections, visit AvatarAges.com.