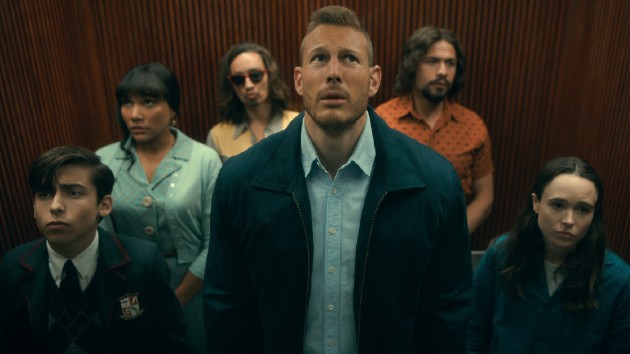 NetflixNetflix has released quite the teaser: the explosive opening scene of The Umbrella Academy‘s second season.

The snippet opens with Aiden Gallagher‘s Five dropping through time into an alternate 1963, where Soviet soldiers are openly battling American forces on the streets.

“What the hell we do now?” Five asks rhetorically.

As he struggles to believe what he’s seeing, he sees his fellow super-powered siblings doing battle with the Reds. Ellen Page‘s Vanya, Tom Hopper‘s Luther, David Castañeda‘s Diego, Emmy Raver-Lampman‘s Allison, Robert Sheehan‘s Klaus and Justin H. Min‘s Ben all use their unique gifts to lay waste to the enemy soldiers, including Allison literally blowing minds with her powers of suggestion.

Appropriately, the battle is set to Frank Sinatra‘s “My Way.”

Just then, a white-bearded Hazel appears, urging Five to leave his family. Cameron Britton‘s character then shows Five why: nukes are on their way, and the only way to save everyone and stop another Armageddon is to go with him through a time portal.

The Umbrella Academy, a live-action adaptation of My Chemical Romance frontman Gerard Way‘s comic book series of the same name, will return to Netflix with new episodes on July 31.